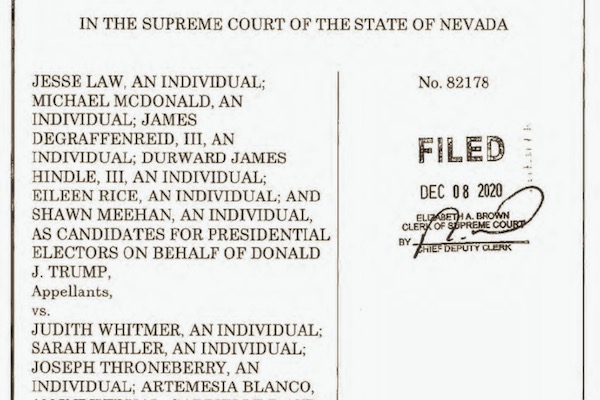 The Nevada Supreme Court has rejected President Trump’s appeal to overturn that state’s election results, affirming the lower court’s decision striking down allegations of widespread voter fraud. In yet another loss for the outgoing President (marking over 50 losses or withdrawals of post-election lawsuits), the unanimous 6-0 ruling held that the Trump team had failed to demonstrate any legal error in the district court’s decision, while noting that the district court had even considered evidence that did not meet evidentiary requirements under Nevada law for expert testimony or for admissibility.

As stated by the court:

“Runbeck is a well-respected election services company headquartered in Phoenix, Arizona. It provides a suite of hardware and software products that assist with mail ballot sorting and processing, initiative petitions, voter registration, and ballot-on-demand printing. It is also one of the largest printing vendors for ballots in the United States. In 2020 alone, it printed 76 million ballots and mailed 30 million. Runbeck’s clients are state and county election officials in the United States. Runbeck does not do work for political parties or candidates.”

The Agilis ballot-sorting machine is similar to those used by the U.S. Postal Service. It takes a high res photo of each ballot as it is run through the machine, it weighs the ballot envelope, checks its barcode, and its signature, all before sorting it for counting or flagging for a deficiency. The decision details the meticulous way the hardware and software was purchased, tested, checked, audited and certified by various officials throughout the state, county and federal government. It also details the meticulous way signatures were checked, and accepted or rejected.

The decision also details the in-person voting process and technology provided by Dominion Voting Systems, which is really quite impressive.  “These voting systems are subject to extensive testing and certification before each election and are audited after each election.”  While bizarre Dominion software conspiracy theories, pushed by the likes of QAnon and former Trump team attorney Sidney Powell, have been debunked repeatedly, including by former Cybersecurity and Infrastructure Security Agency (CISA) Director Christopher Krebs, this was not addressed by the court.

Examples of testing and certification cited by the court include:

After detailing various prior Trump election fraud cases that have been dismissed, the court waded through the evidence presented. Despite the bulk of the Trump team’s evidence consisting of inadmissible hearsay, the court still considered it. “The Court nonetheless considers the totality of the evidence provided by Contestants in reaching and ruling upon the merits of their claims.”

What follows, is the embarrassing argument set out by the Trump team, led by lawyers Shana D. Weir (Weir Law Group) and Jesse R. Binnall (Harvey & Binnall), more examples of how credible, capable lawyers refuse to touch these frivolous cases.

Incredibly, key “expert” witnesses offered by the Trump team failed miserably to abide by even the most basic requirements for offering expert evidence. Experts Michael Baselice (citing incidence of illegal voting in the 2020 General Election based on a phone survey of voters) and Jesse Kamzol (claiming significant illegal voting occurred in Nevada during the 2020 General Election, based on his analysis of various commercially available databases of voters) failed to provide sources for data, a verification of conclusions, and proof of quality control of the data presented. One expert report submitted by Scott Gessler also “lacked citations to facts and evidence” that Gessler had used to come to his conclusions and “did not include a single exhibit to support of any of his conclusions.”

The defendants, meanwhile (led by Bradley S. Schrager and team at Wolf Rifkin, Shapiro, Schulman & Rabkin, and Marc E. Elias and team at Perkins Coie), submitted the deposition testimony of Wayne Thorley, Nevada’s former Deputy Secretary of State for Elections, Jeff Ellington, President and Chief Operating Officer of Runbeck (manufacturer of the Agilis machine), and Joseph P. Gloria, the Registrar of Voters for Clark County.  In each case the court found their testimony to be credible.

The defendants also produced the testimony of Dr. Michael Herron, a pre-eminent, highly qualified expert in the areas of election administration, voter fraud, survey design, and statistical analysis. As stated by the court, “Dr. Herron holds advanced degrees in statistics and political science; has published academic papers in peer-reviewed journals about election administration and voter fraud; and has an extensive record of serving as an expert on related topics in litigation before numerous courts, none of which has found that his testimony lacks credibility.”

In analyzing the Trump team’s primary claim that voter fraud occurred at multiple points in the voting process at rates in Nevada that exceed the margin of victory in the presidential race, the court found none of the Trump team’s arguments to be persuasive. In fact, it found that Trump expert Scott Gessler actually contradicted this argument by testifying that he has no personal knowledge that any voting fraud occurred in Nevada’s 2020 General Election.

Relying on Dr. Herron’s testimony, the court concluded that:

Based on this testimony, the Court found that “there is no credible or reliable evidence that the 2020 General Election in Nevada was affected by fraud.”

Moving next to allegations and testimony submitted claiming that there were problems and irregularities with the provisional balloting process, that certain voters were allowed to vote without proper Nevada identification, and that the consequences of voting provisionally were not explained to voters, the court struck down each claim:

As to claims of “mismatched signatures”, namely that the Agilis machine consistently malfunctioned and accepted invalid signatures, again the court found a complete lack of credible evidence: 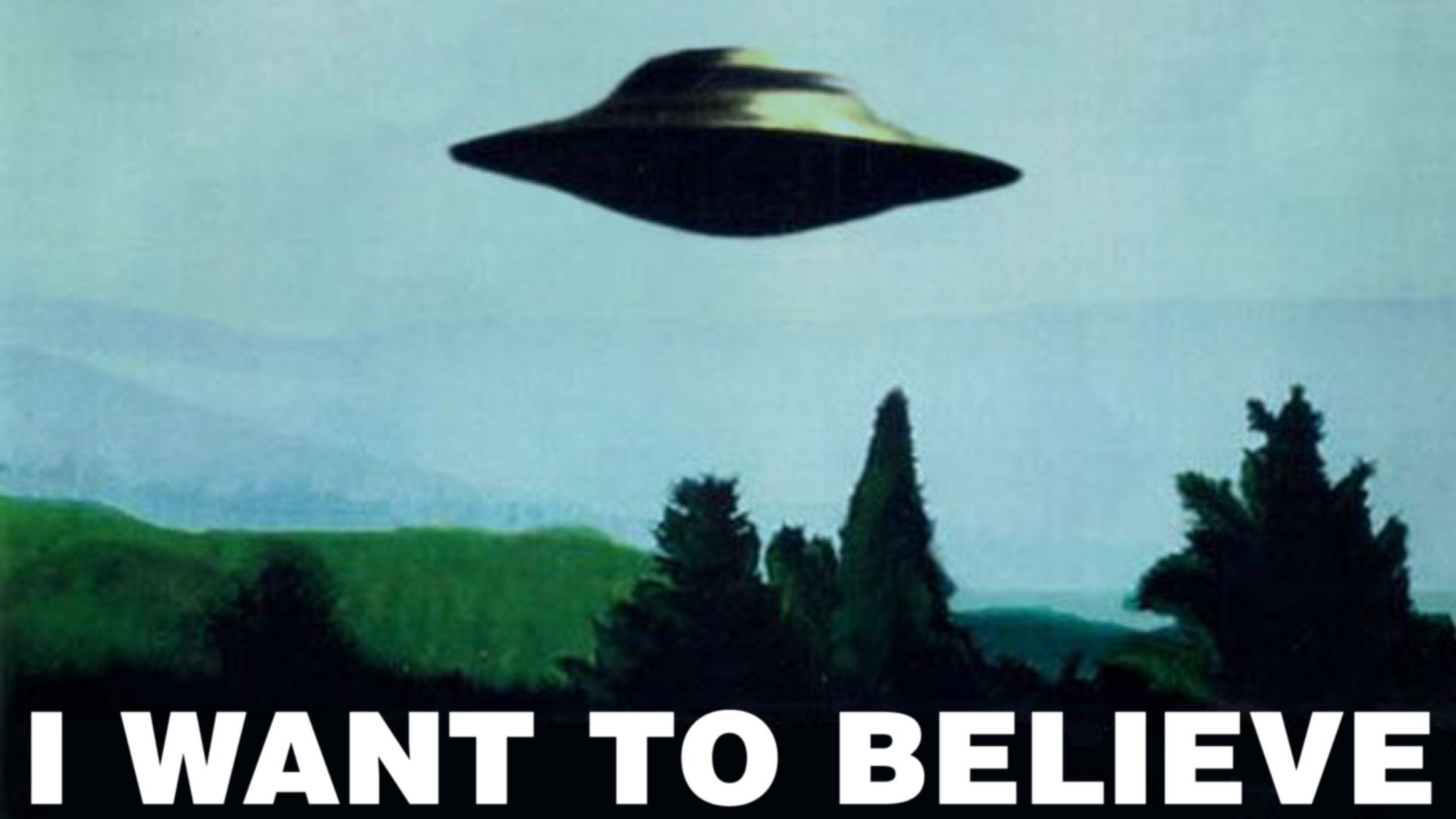 Echoing the baseless claims made in other Trump election fraud lawsuits, the court also rejected claims that voters were sent and cast multiple ballots and otherwise double voted, that non-Nevada residents cast ballots and those ballots were counted, and that numerous persons arrived to vote in-person on election day only to find out that a mail ballot was cast in their name already. Again, each affidavit submitted (regardless of hearsay), as in numerous other Trump election fraud lawsuits, contained conclusory, self-serving, uncorroborated accounts, that are easily explained.

While we may be tempted to cast these witnesses as liars, they may actually believe what they think they saw. They may have witnessed something they believe to be suspicious, questionable or out of the ordinary. Yet all obviously fail to ask real questions or look to other possible explanations for these supposed anomalies, most likely swayed by President Trump’s repeated mantra that there was indeed widespread, nefarious election fraud.  They “Want to Believe”.

This brings to mind one witness in the Pennsylvania lawsuit, Jesse Morgan, a contract truck driver for the U.S. Postal Service. Morgan testified he delivered what he was told were ballots from a postal facility in Bethpage, New York, to Lancaster, Pennsylvania on October 21. While unsure of the amount of supposed ballots shipped (“two pallets” worth), he said he parked the USPS trailer at the Lancaster city postal facility, but when he returned the next morning, the trailer was gone. Ignoring the fact that he’s an admitted “ghost hunter” with a criminal record, Morgan may actually have believed something fraudulent took place. The problem is, he failed to ask any real questions or investigate the matter, before spreading conspiracy theories that were quickly lapped up by certain media and tweeted out by President Trump. The story was easily debunked. It actually is common for absentee ballots to be mailed from one state to another, as the ballots are meant to be used by college students, members of the military, people who travel for work, and others who may be absent on Election Day. In addition, the number of absentee ballots returned in Lancaster County was less than the number requested, which is completely normal.

Of course, responsible, ethical legal counsel, as officers of the court, are required to ask these questions and weed out frivolous claims and unsupported evidence. Here, Trump team lawyers again failed miserably to do so.  Under the Federal Rules of Civil Procedure, Rule 11 (NRCP 11 in Nevada, or NYCRR 130:1 in New York), such frivolous conduct could be sanctionable.

Certainly arguing the “Hugo Chavez, George Soros, Hillary Clinton, Dominion algorithm vote flipping” conspiracy theory would be sanctionable. But where exactly is the line? In my experience obtaining sanctions is an increasingly uphill battle. But I really do Want to Believe that at some point courts will sanction Team Trump. There certainly has been a call for censure or disbarment.

Following the Trump election fraud playbook, the usual litany of baseless allegations were also pushed by counsel in the Nevada lawsuit: that election workers were pressured to push ballots through despite deficiencies; that votes from deceased voters were improperly cast and counted; that persons cast mail ballots in other persons’ names; that election officials counted ballots that arrived after the deadline for submitting them; that Nevada failed to properly maintain its voter lists resulting in illegal votes cast and counted; and that the postal service was directed to violate USPS policy and improperly deliver ballots.

As in numerous similar lawsuits, each was rejected after careful analysis and for all of the same deficiencies.

Lastly, the Nevada district court analyzed and rejected claims that there was Biden-Harris “candidate misconduct”. Per the decision, the record does not support either “a finding that groups or individuals linked to the Biden-Harris campaign offered or gave, directly or indirectly, anything of value to manipulate votes in this election or otherwise alter the outcome of the election” or “that multiple ballots were filled out against a bus bearing the Biden-Harris emblem outside a polling place in Clark County.”

While the court held that the standard of proving fraud required clear and convincing evidence, “even if a preponderance of the evidence standard was used, the Court concludes that Contestants’ claims fail on the merits there under or under any other standard.”

In the district court’s analysis, the Trump team failed to prove:

Once again, the Trump team election fraud narrative has produced no results, and released no “Kraken“, while threatening to inflict ongoing harm to America’s faith in its electoral and democratic process. Comforting, however, is the fact that America’s judicial system has proven itself to be a reliable and credible bulwark against enemies of democracy.

The district court’s well reasoned 34 page decision should be required reading for all U.S. citizens, especially those that still have doubt.  It sheds light on a mountain of lies and deception, pushed by unethical lawyers led by Rudy Giuliani, Sidney Powell, Jenna Ellis, Joe diGenova, and Lin Wood, irresponsible media, unscrupulous politicians, and an outgoing, increasingly unstable POTUS.

The danger to democracy is real, as are the physical threats of violence and intimidation hurled against elected officials and their families. That recently SCOTUS unanimously declined to weigh in on the Pennsylvania lawsuit brought by Republican Rep. Mike Kelly is promising. But just how long must this go on until violence results?

“America will never be destroyed from the outside. If we falter and lose our freedoms, it will be because we destroyed ourselves.”

LOPRESTI, PLLC (c) 2020 LOPRESTI, PLLC publications should not be construed as legal advice on any specific facts or circumstances. The contents are intended for general information purposes only and may not be quoted or referred to in any other publication or proceeding without the prior written consent of the Firm, to be given or withheld at our discretion. To request reprint permission for any of our publications, please contact us at info@lopresti.one. This publication is not intended to create and does not constitute, an attorney-client relationship. The views set forth herein are the personal views of the authors and do not necessarily reflect those of the Firm.